The SARS-CoV 2 virus concentration is the number of occurrences of the reference sequence identifying SARS-CoV 2 RNA in one milliliter.

The SARS-CoV 2 virus concentration indicator is expressed as copy number per milliliter.

Monitoring of the overall carriage rate: 2 samples of 500 ml of wastewater are provided daily. These samples, averaged over 24 hours, come respectively from and according to the global constitution of the networks: from the segregated network (RS) and/or the combined network (RU)

Spatial distribution: Instantaneous samples of 500mL of wastewater are taken (within a 3-hour period) at identified sampling points. These allow the network to be divided into collection sectors and to identify local trends.

- extraction of the virus,

- quantification by comparison to an inactivated SARS-CoV-2 standard.

The calibration line used is as follows:

*The 2 x 105cg/ml inactivated SARS-CoV-2 control used is as follows:

In our restitutions, 4 zones of concentration have been defined:

Green: Area where the carriage rate remains low (less than 0.4% of the population) corresponding to concentrations less than or equal to 160 copies/ml

Yellow: high carriage rate area (at least 0.4% to 1.2% of the population) corresponding to concentrations between 160 and 480 copies/ml

Orange: high carriage area (at least 1.2% to 4% of the population) corresponding to concentrations between 480 and 1600 copies/ml

Red: Very high carriage zone (at least 4% of the population) corresponding to concentrations greater than or equal to 1600 copies/ml

an anticipation of COVID19 outbreaks by 5 to 6 days,

an estimation of the population impacted by the epidemic by counting even asymptomatic cases,

a possibility to locate geographically the foci of infection 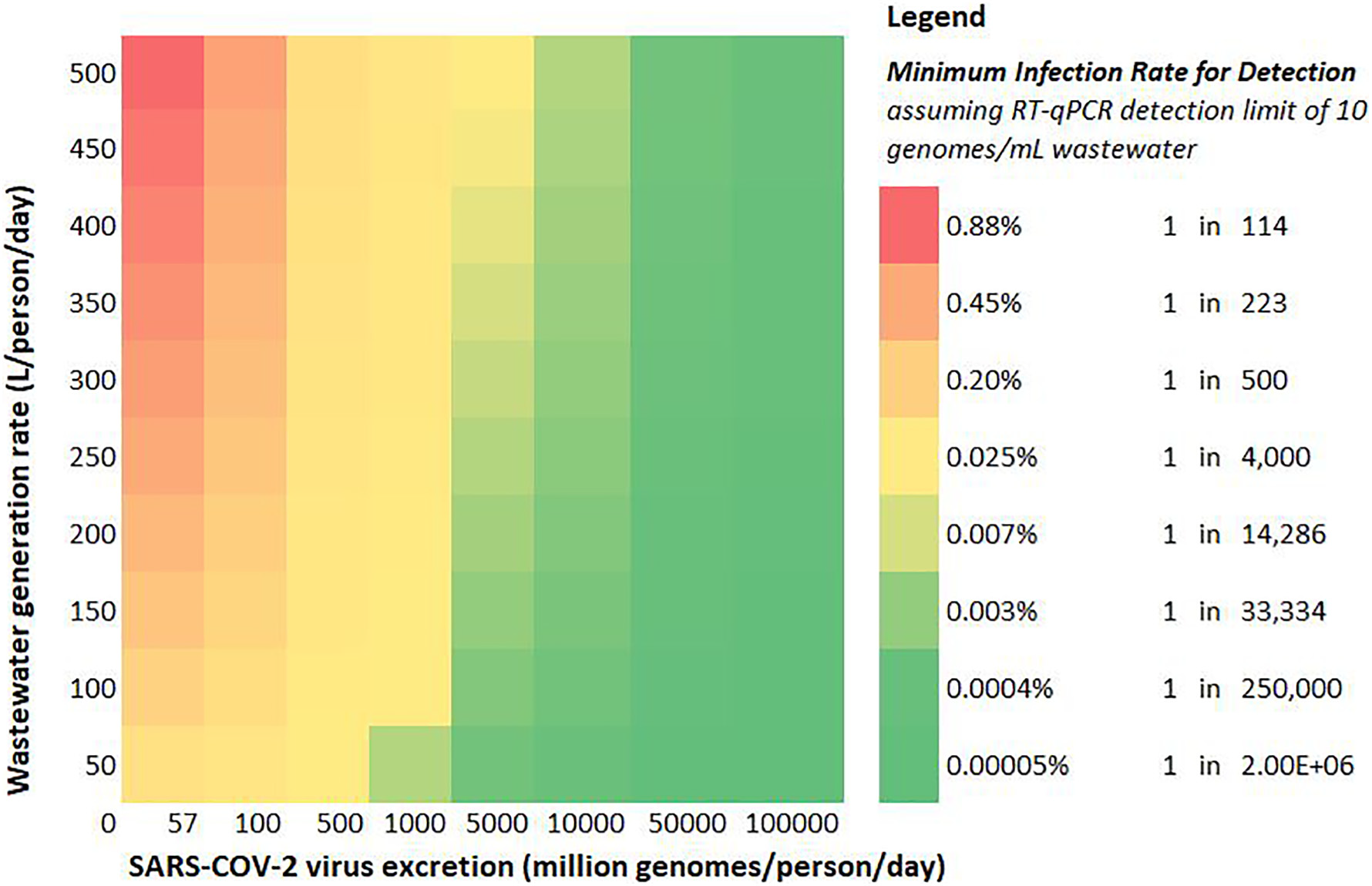 The COVID19 viral cycle admits an enteric phase that results in the release of virus in the feces (Wölfel et al., 2020).

For the interpretation of the data provided we will take a value of 107 RNA copies/g since we are monitoring a resumption of the epidemic.

The French National Society of Colo-Proctology (SNFCP) evaluates the average weight of seal discharged by an individual at 150 g/day.

We are therefore on an abscissa of 1000 for the table provided.

For example for Marseille :

The separate network implies a production of 70 x 106 liters of water per day for a population estimated at about 640,000 inhabitants. The wastewater production is therefore 175 l / inhabitant / day.

The combined sewerage system implies a production of 120 x 106 liters of water per day for an estimated population of about 360,000 inhabitants. The wastewater production is therefore 200 l / inhabitant / day.

Under these conditions, the detection threshold of our method (50 copies/ml) is therefore 0.125% of the population affected by SARS COV2 even in an asymptomatic way.

We can also estimate a percentage of concentration in variants thanks to the following formula: