Written by Sébastien MEIGE
Updated over a week ago

Principles of stratified random sampling
Among the sampling methods available, this method consists first of all in constituting relatively homogeneous strata in a target population. Secondly, to determine samples within each of the strata.
The stratification of a population is constructed from variables of interest chosen according to the study and which can be of several types:

Let us consider the target population, such as all the inhabitants of Morbihan (INSEE census whose data are available in Opendata at the following address: https://www.insee.fr/fr/statistiques/1893198 ), whose main residence is in the department, on the 1st January 2020.
The variables of interest retained are the sexes and the age groups (for 17 age groups of 5 years) of the inhabitants of Morbihan.
We then have 34 strata (2 sexes x 17 age groups) in the target population distributed as follows: 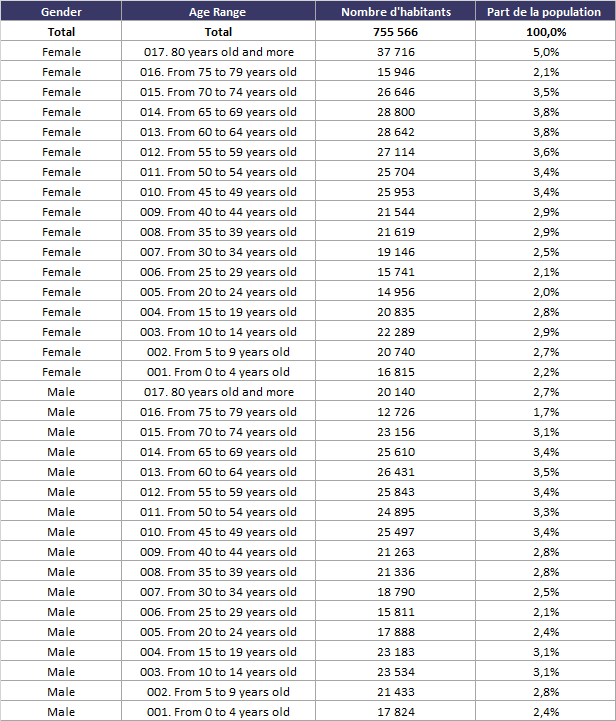 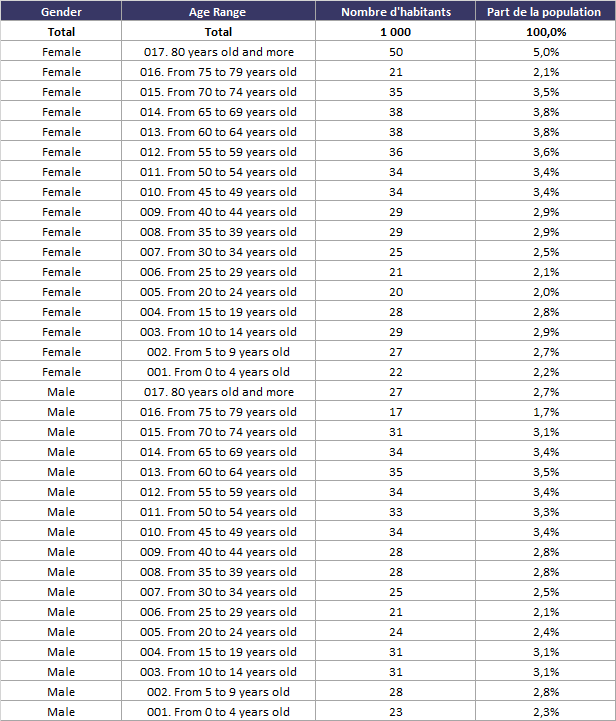 This sample may constitute the target to be questioned in each of the strata in order to be representative of the target population and constitutes the first phase of the sampling.

The second phase of the sampling consists in choosing the individuals to be interviewed in each of the strata.
The selection of individuals in the sample can be considered as a random selection without replacement: an individual who meets the inclusion criteria is drawn at random, but this individual will not be questioned again.

In the analysis phases, the individuals questioned can be subjected to a questionnaire allowing an enrichment of descriptive variables, potentially used subsequently. This makes it possible to refine the analyzes on sub-populations.

Application to serological tests for the SARS-Cov-2 virus

To conduct a seroprevalence survey of the SARS-Cov-2 virus within the Morbihan department, we can use the above sampling method, representative of the population of the department , in a study including asymptomatic patients.

The measurement of the quality of a test , particularly in epidemiology, is measured by 2 factors:

You can find a detailed description of these 2 concepts in the following article:
http://success.openhealth.fr/fr/articles/3928135-sensibilite-et-specificite-d-un-test

The individuals will have to be questioned will have to be chosen randomly to reach the numbers of representativeness of each stratum.
The study participants must, respecting the strictest anonymity:

vulnerability criteria : > 65 years old, diabetic, suffering from cardiovascular or respiratory diseases, immune weaknesses due to disease or therapy , with active or obese cancer
place of residence : collective or individual
professional activity profession and possibility of exercising this function in time of confinement
handicap

All of this information would allow: